The condition of the protective surface film is of paramount importance in maintaining the corrosion resistance of copper-nickel alloys. Initial corrosion rates reduce as the film matures, and the improvement continues for a period of several years as shown below. Stabilised corrosion rates in the order of 0.002mm/a are not uncommon for both 90-10 and 70-30 copper-nickels.

Initial exposure to clean, fresh seawater is important in achieving good-quality films; filling with polluted water or stagnant seawater that has putrefied should be avoided or quickly drained or flushed through afterwards. The critical period is frequently downtime following commissioning or hydrotesting, when any sulphides formed in leftover stagnant water may cause pitting. Subsequent exposure to oxygenated water can lead to high corrosion rates until new protective films are formed. Guidelines can be found on www.coppernickel.org.

Ferrous sulphate dosing has traditionally been used to improve the corrosion resistance of copper-nickels in polluted seawater systems. Chlorination at low levels has also been found to improve resistance. Where both are used, dosing should be staggered to avoid a floc forming.

Copper-nickel alloys lie midway in the galvanic series (see figure) and normal galvanic guidelines in seawater apply for these alloys. In some cases, adding chlorine to the seawater may reduce or even prevent galvanic corrosion that may otherwise occur from more noble alloys in natural seawater, e.g. with super stainless steels. Connection to less noble alloys or cathodic protection (CP) can make attachment of marine organisms to copper-nickel surfaces more likely. 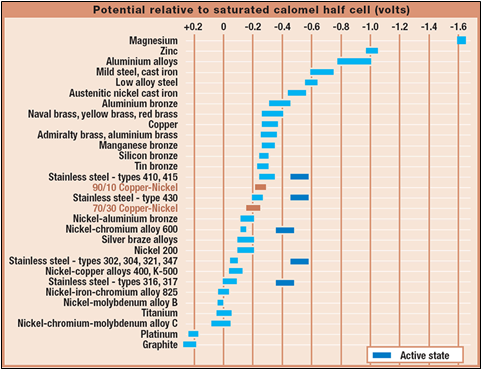