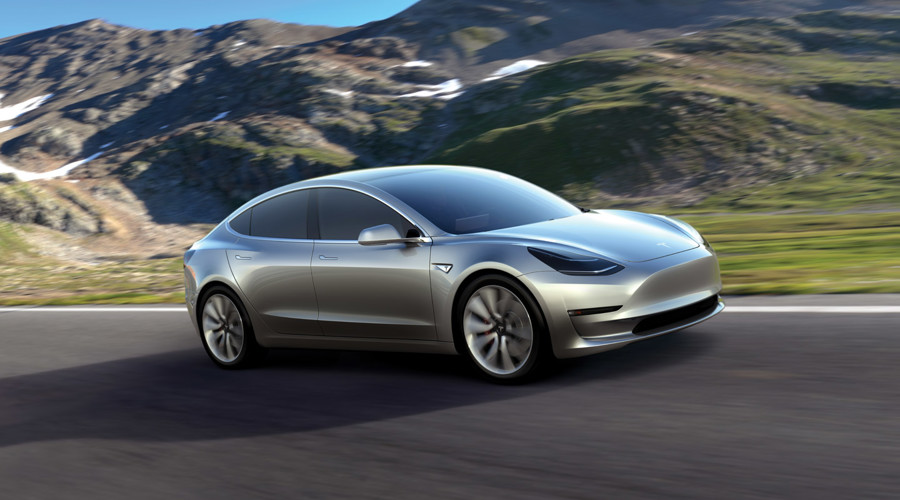 The electric vehicle market is expected to be by far the largest and most dominant market for lithium-ion (Li-ion) batteries. Despite the strong desire to increase EV sales by all involved in the value chain, proliferation has been curbed due to the high cost to the consumer and the perceived disadvantages of owning an EV. Range anxiety, a lack of charging stations and fire safety worries, are among the top concerns.

The electric vehicle (EV) market is expanding on a global scale, primarily due to concerns over energy consumption and greenhouse gas generation.

High nickel-based Li-ion batteries is the current technology of choice for EVs because of the high energy density that nickel provides. Although lithium is the common denominator in Li-ion batteries because of its light weight and high electro-potential (energy), nickel is used in many battery chemistries which are increasingly gaining commercial acceptance due to the attributes that it brings. But there are also many other rechargeable lithium battery systems.  But there are also many competitor rechargeable lithium battery systems.

The most common commercial Li-ion systems are:

Each of these basic technologies has evolved and improved over the years but there remain fundamental technological differences. Not only do energy density, power density, safety, cycle life and cost differ, but also voltage and voltage profiles vary between the technologies. Because of these variations, different Battery Management Systems are required.  The BMS controls the operation of the battery in conjunction with the car electronics. It can be very complex, and the system used will vary depending upon the cell technology and the vehicle itself. Other battery technologies outside of Li-ion do exist and are being developed in laboratories but are unlikely to make a difference in the EV market. These include zinc-air, aluminium-air, Na-ion and Li-air. 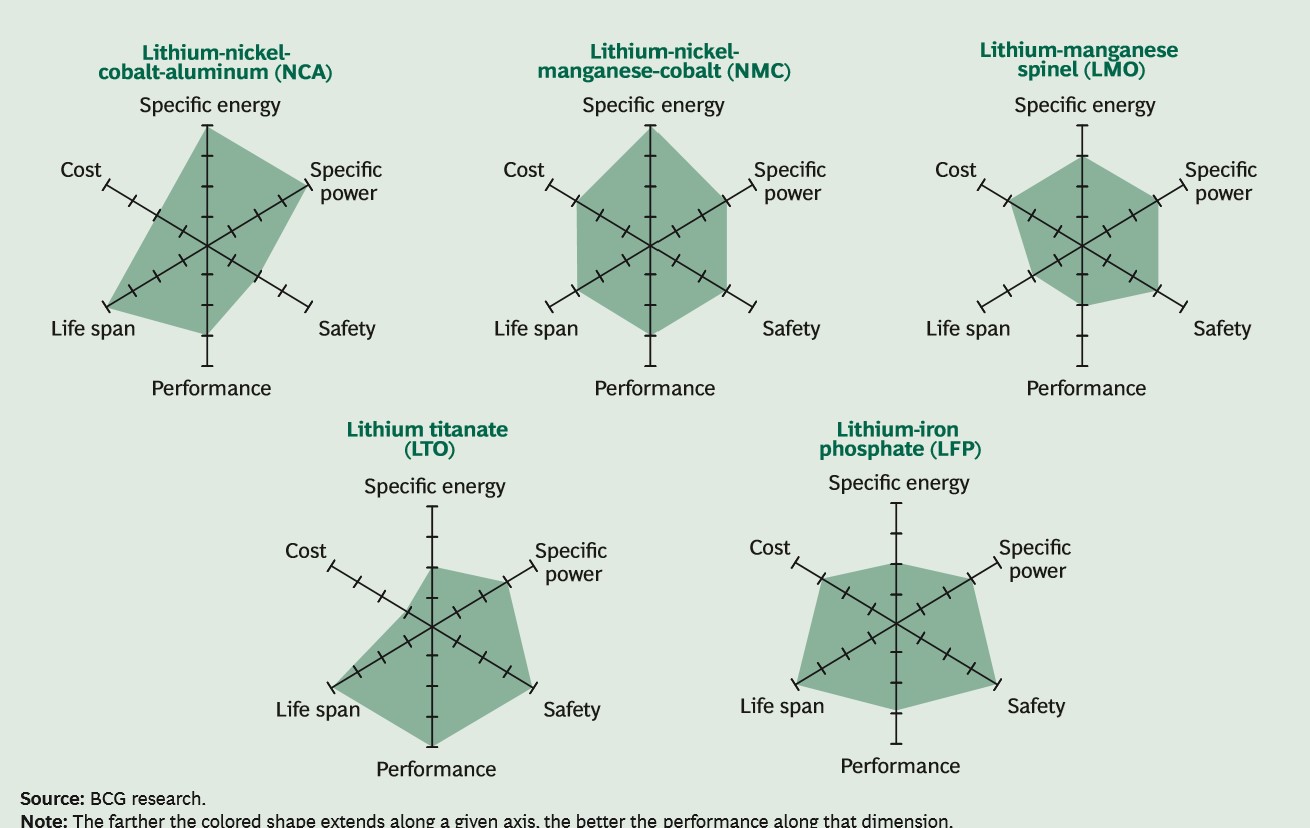 The difference between specific energy and energy density 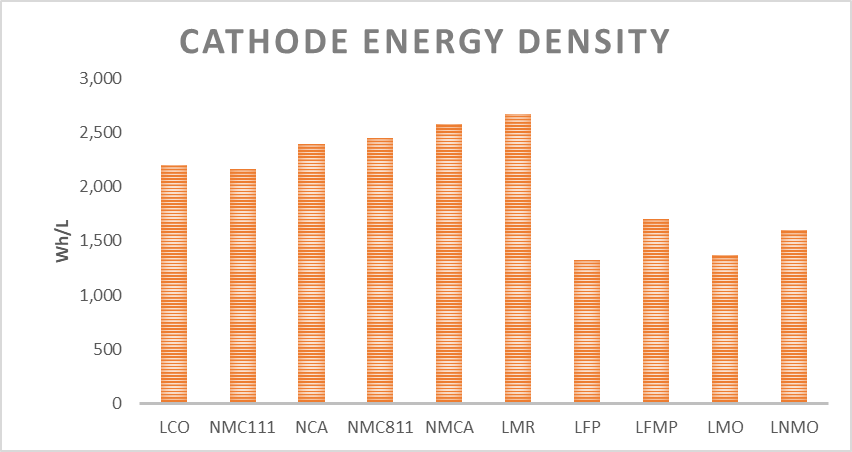 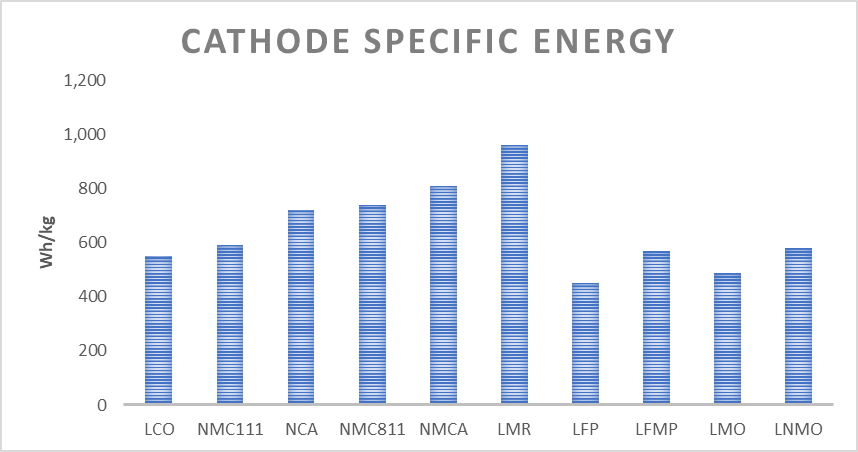 Automotive OEMs focus on seven main attributes: cost; energy density, specific energy, power density, both volumetric and gravimetric; cycle life; safety; low and high temperature tolerance and performance. The priority for OEMs is energy density because it defines the range per charge that a vehicle can drive, and the cost of the battery because the EV must be affordable to the general consumer.

Nickel-based technologies respond to both of these criteria. Over the past decade a mix of nickel, cobalt and manganese or aluminium, oxides (NMC/NCA) has been the best technology.

The higher the nickel content, the higher the energy density and since the nickel replaces cobalt, the cost is reduced. NCA, which is predominately used only by Tesla, has approximately 80% Ni, 15% Co, 5% Al whereas the most common EV battery used by all other OEMs is a NMC622 which is 60% Ni, 20% Mn, 20% Co.  Recently NMC811, (80% Ni, 10% Mn, 10% Co) has been developed and is considered to be the technology of the near future.

Competitors to this high-nickel technology have been widely publicized. For the most part, what we see published in journals, newspapers and magazines are reports on improvements to old technology. But the reality is that many of them are deficient in one or more performance attributes that will make them difficult to find a wide market. Nickel-based technologies are the batteries of choice for EVs for the foreseeable future.

Nickel-based technologies are the batteries of choice for EVs for the foreseeable future.

The pros and cons of different battery technologies

LFP was one of the earliest Li-ion technologies commercialized, primarily due to its durability and safety. However, it has been gradually phased out of EV batteries because of low energy density and replaced with more powerful NMC.

Recently a new form of LFP has been developed that incorporates manganese (LFMP), significantly raising the energy density. This new cathode along with a silicon-carbon anode demonstrates approximately 200Wh/kg, at the cell level. This is much higher than the past but it still does not compete with NMC811/NCA at 300Wh/kg at the cell level.

Compared to high nickel NMC/NCA, LFMP is  estimated to be 20% - 25% cheaper than NMC/NCA but  30% lower energy density is still a significant barrier in EVs.

It is expected that LFMP will dominate in areas where long life and durability is essential. These markets include commercial vehicles, buses and ferries.

Like LFP, LMO- (with a special cubic molecular structure that has to be created for manganese oxide so that Li-ions are able to move in and out)  was one of the earlier technologies commercialized primarily due to its high-power capability and good safety. But like LFP it has been overtaken by NMC due to its poor energy density. It is unusual for OEMs to use LMO, but Mitsubishi does use a mix of LMO and NMC in their i-MiEV.

Recently, LMO has been modified to include 30% nickel in the structure, (LNMO). This increases the energy density and because manganese also allows for a higher voltage, (4.7V), theoretical energy is much improved.

The new LNMO is expected to be 30% - 50% the cost of NMC811 but the practical energy density is also only 65% that of NMC811. It is unlikely LNMO will be used in full sized EVs but could be suitable for e-bikes and scooters.

LMR is a non-spinel manganese rich technology that can also include nickel in small amounts. Theoretically, this is a very high energy dense material due to utilizing a two-electron transfer and the possibility of a 5V potential. Unfortunately, these two extremes are counter to durability and the cycling stability is very poor, therefore this technology is not expected to be acceptable for the EV market.

Li-S is a commercialized technology that is used almost exclusively in weather balloons and drones. It is basically the highest specific energy dense battery available at nearly 50% higher than NMC811. The problem is maintaining the structural integrity of the sulfur cathode and keeping it from dissolution into the electrolyte. The result is an extremely poor cycling that suffers from serious fading of capacity and is not a technology that can be used in EVs.

Solid-state Li-ion has been a developing technology over the past few years. The term solid-state simply means that the electrolyte is not liquid but rather a solid or jell-like, ionically conductive material. The idea is to create an energy storage system with increased safety due to the non-flammability of the electrolyte. Due to the significant safety advantage of solid-state, the anode can also be made of lithium metal which results in a significant energy boost. Unfortunately, the cyclability of the lithium anode is dependent upon the excess lithium that is used, which in turn reduces the  energy density. Consequently, for an EV there must be a compromise between energy density and cycle life.

Regardless of the amount of lithium in the system, the cathode material does not change. The highest energy density will still use a high nickel cathode, and only the electrolyte and anode are different.

Solid-state is viewed by many to be the future technology for EVs because in a car crash this type of Li-ion should not burn. The disadvantage is that the kinetics of the system is lower than regular Li-ion and consequently the power density is not as good, negatively affecting EV acceleration and the battery charge time. Nevertheless, Toyota has reported that they will introduce an EV this year with a solid-state battery.

Silicon technology has also been under development for a few years with continued success. This technology uses silicon as a component of the anode, replacing some of the graphite that is commonly used. Silicon has a theoretical energy density ten times that of graphite and therefore is an extremely attractive material. The problem in using silicon is significant physical expansion of the material during charging of the battery. This expansion and then contraction in discharge, cause stress cracks to form in the material increasing impedance and reducing capacity.

Much work has gone into structurally supporting this anode material and it is widely used today as a small percentage additive to the graphite in EVs. As in solid-state technology, commercialization for EVs will depend on an acceptable compromise between energy density and cycle life.

As in solid-state technology, the cathode does not change with the silicon technology anode.  High nickel cathode material will be used with silicon to achieve very high energy densities. Commercialization of a 350Wh/kg battery using a high nickel cathode and a reasonably high percent silicon anode is very near reality.

Fuel cells are not batteries but rather an energy storage system. Fuel cells work by combining hydrogen fuel stored in a tank with oxygen from the air through a finely engineered micro-porous membrane. Fuel cell technology development has been slow due to cost issues, reliability and operating efficiency but significant improvements have been made. Gravimetric energy density for fuel cells is very good but the volumetric energy density, (considering the on-board hydrogen tank, pumps and process piping) is not. Secondly the power density is low, so a vehicle that demands good acceleration (like a passenger EV) requires an additional Li-ion battery or ultracapacitor module for acceptable performance.

Adaptation of fuel cells will probably occur in fleets of commercial vehicles like delivery trucks and buses because the central depot would be able to support a hydrogen refueling station, but the infrastructure required means adaptation for private passenger cars is unlikely.

Visit the Nickel Institute website for more on nickel in batteries.

Ken has over 35 years of experience in the advanced battery and ultracapacitor industries where he has been involved in research and development, product development and design, manufacturing, and commercialization of battery technologies. His international career has spanned advanced portable energy systems, lithium-ion polymer batteries, ultracapacitors and research and development in senior roles in Canada, Italy, Ukraine, Germany and the US. After two years of leading the Market Development Battery Project for the Nickel Institute, in 2022 Ken Rudisuela moved back into the private sector and the battery value chain.

Battle of the batteries - Cost versus Performance