Is there enough nickel? Reserves, resources and recycling

Should we be worried about there being enough nickel to supply the transition to electric vehicles and cleaner energy sources? Given its wide range of uses in important existing and emerging technologies, this is a frequently asked question.

Climate change and the transition to electric vehicles have added to the applications that rely on the properties of nickel. Some commentators have looked at these developments and questioned whether there is enough nickel to supply future demand. Mark Mistry argues that known resources and reserves coupled with excellent recyclability will mean that nickel is available for future generations.

Reserves and resources of nickel

Key to the answer is understanding the difference between nickel reserves and resources as well as considering recycling. As defined by the Committee for Mineral Reserves International Reporting Standards, “A Mineral Resource is a concentration or occurrence of solid material of economic interest in or on the Earth’s crust in such form, grade or quality and quantity that there are reasonable prospects for eventual economic extraction. A Mineral Reserve is the economically mineable part of a Measured and/or Indicated Mineral Resource.”

Key to the answer is understanding the difference between nickel reserves and resources as well as considering recycling.

What is the difference between reserves and resources?

Standard definitions of “reserves” and “resources” are important because the concepts are highly relevant to investors in mining projects. The main distinction is that “reserves” imply an increased level of knowledge and confidence.  The exploration activities of mining companies continuously convert resources into reserves. This means the availability of raw materials such as nickel is less about whether there is enough in the ground, but rather more about whether there is enough production capacity available in a short time frame to satisfy a sharp increase in demand.

Economic concentrations of nickel occur in sulphide and in laterite-type ore. Rich deposits are found in Australia, Indonesia, South Africa, Russia and Canada, which together account for more than 50% of the global nickel resources.

Although there has been a significant increase in nickel mining over the past three decades, known nickel reserves and resources have also steadily grown.

Nine countries account for 75% of global nickel reserves. Laterite-type (or oxide-type) resources are found in Indonesia, the Philippines, Brazil, Cuba and New Caledonia. These ore deposits and mines are principally found in equatorial regions and production from this type of deposits has steadily increased in recent decades.

Sulphide-type deposits are present in South Africa, Russia and Canada.

Australia is endowed with both sulphide- and laterite-type ore deposits.

When it comes to future resources, there are also believed to be additional significant nickel deposits in the sea. Manganese nodules, which are found on the deep-sea floor, contain significant amounts of various metals, including nickel. Recent estimates indicate that there are more than 290 million tons of nickel contained in such deposits.[3] Deep-sea mining is in its infancy. Technologies and proper regulatory frameworks are expected to be developed to facilitate access to these resources in the future.

Although there has been a significant increase in nickel mining over the past three decades, known nickel reserves and resources have also steadily grown. 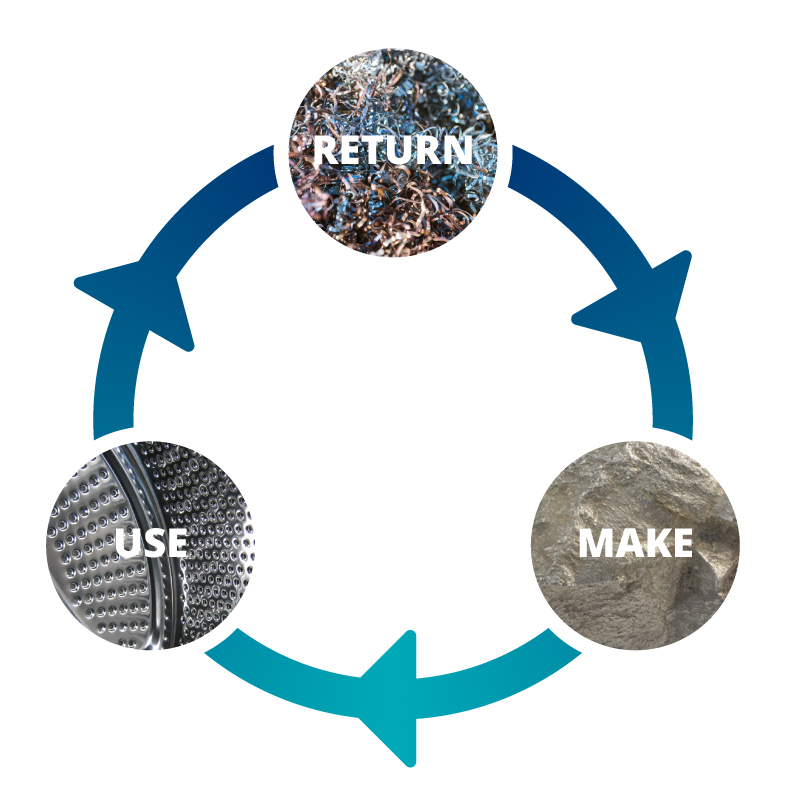 Today, society sees metal recycling as an environmental activity, but it has existed for thousands of years as a profitable economic activity. The global efficiency of recycling nickel from end-of-life products for the reference year 2015 was 68% – among the highest recycling efficiencies for the metals industry.[4]

Recycled nickel does not lose its properties and is a valuable additional source of the metal. In the case of nickel-containing stainless steel, the primary use of around 70% of nickel production, very high recycling rates can be reached. Nickel is one of the most valuable common non-ferrous metals. Given its value as a commodity, the commercial motivation to use it effectively in the first place is very strong. And there is a similarly compelling incentive for recovering and recycling nickel effectively at all stages of the production and use cycle.

Because nickel is found across the globe, there is a diverse and secure supply chain. Nickel-containing ores are currently mined in more than 25 countries worldwide. Asia Pacific economies account for 65% of global nickel mine output. Indonesia, the Philippines, Russia, Australia and Canada are the biggest nickel mining countries.

There are thousands of end-use products which contain nickel, including batteries, jet and wind turbines, stainless steel pots and pans, electronic equipment and water pipes. Nickel is usually converted into so-called first-use products, such as alloys, before then being manufactured into end-use products.

Nickel has a well-deserved reputation as an enabler of technology.  Its properties of toughness, malleability and enhanced corrosion resistance allow superior performance in difficult environments and at extreme temperatures. And its energy density is valued in lithium-ion batteries. These characteristics make nickel an inevitable raw material in many innovative end-uses, where it ensures longer life, less maintenance, higher functionality or increased efficiency.

Nickel’s abundance and unique combination of properties are why nickel-containing materials play such an important role in providing energy, transport, food and clean water and why they will continue to contribute to a durable and sustainable economy and society.

Will the EU’s Sustainable Products Initiative get the balance right?

How to calculate GHG emissions from nickel production

EU Batteries Regulation: Where do we stand?

“What gets measured gets done”: the importance of life cycle data