The electric vehicle (EV) market is growing at a healthy rate, driven mostly by the global desire and need to reduce the global warming influences contributed by internal combustion engines. The heart of electric vehicles is the Li-ion battery which stores the energy used in propulsion rather than the burning of fossil fuels. The main material used in the best Li-ion batteries is nickel. Nickel-based Li-ion batteries have the highest energy density of all technologies, allowing for the maximum amount of stored energy for the highest driving range for a vehicle. Nickel-based batteries have also the widest temperature range, in operation from cold northern winter climates to hot desert conditions. Advanced Li-ion batteries based on nickel also can have very high cycling capability allowing an electric vehicle to travel one million miles or more before a replacement battery is needed.

The Nickel Institute is active in the support of the electric vehicle industry, utilizing the best battery technology, which will help accelerate the global adoption of EVs and reduce greenhouse gas emissions.

In 2021, the Nickel Institute conducted a detailed investigation into the total cost of owning (TCO) an electric vehicle, from purchase through to the end of ownership, in various parts of the world. The TCO represents the complete financial cost during the time a consumer owns the vehicle.
This TCO was also conducted for equivalent sized internal combustion engine, (ICE), vehicles for the purpose of comparing the economics being a significant driver in the uptake of electric vehicles.

The global regions looked at were the USA ( California, New York, and Florida); Europe France, Germany, and the UK) and Asia (China, Japan, and South Korea).

Asia is a significant driving force in the adoption of pure electric vehicles with China posting 1.035 million new vehicle registrations in 2020. The USA, despite a low share of the overall automotive market, was second with 256,000 registrations, Germany with 201,000 and the UK with 113,000. Globally, (according to Rho Motion), sales of EVs will increase by 80% in 2021.

On behalf of the Nickel Institute, Avicenne Energy conducted the thorough TCO investigation on all three continents. In the geographical areas, distinct classifications of cars were looked at; small, mid-sized and luxury with each classification having at least one EV and one ICE equivalent for comparison. Small vehicles were not investigated in the USA and China due to a lack of direct comparison and luxury vehicles were investigated only in the USA and Europe. The automotive manufacturers covered in the TCO study included, GM, Tesla, BMW, VW, Peugeot, Honda, Nissan, Kia, Toyota, Hyundai and JAC.

The metrics investigated for each model in each category and in each area were; acquisition costs, subsidies, taxes, charger costs, gasoline prices, electricity rates, maintenance costs, the residual value of the vehicle upon trade-in and the distance travelled per year. A value for the TCO was then calculated for durations of 3, 7 and 10 years of expected vehicle ownership with high and low mileage consideration.

Social economic conditions vary considerably between regions affecting the affordability of an EV. There are also significant differences between countries with respect to subsidies, taxes and incentives when purchasing an EV, however the findings of the reports indicate that the total financial cost of owning an EV could be a compelling advantage to the consumer for most vehicle models. Overwhelmingly the TCO is favourable for small and mid-sized electric vehicles throughout the world and only luxury vehicles vary depending upon the location and term of ownership.

Currently, in all geographical areas and in all equivalent models, the EV sticker price is more than an ICE and, in some cases, considerably more. Predominately however, the subsidies and high residual value of EVs are strong off-setting factors in the TCO.

In Europe and Asia, the higher cost of petroleum and diesel versus electricity also has a major impact on the TCO, even though electricity costs in Germany, as an example, are three times that of the USA.

Contrary to smaller vehicles, luxury vehicles can have an extreme gap in the purchase price. Equivalent EVs in this category can be nearly twice as expensive to buy than their domestic ICE counterparts. This price difference offsets the high cost of petroleum and for high mileage drivers, the TCO for EVs can be higher than for ICEs.

The USA has the lowest gasoline prices and the least subsidies of all the countries considered. Therefore, the TCO of an EV is not as favourable as in other countries, but in time the cost of EVs is likely to reduce and the TCO results are likely to be significantly different.

Figure 1 shows the percent differential a mid-size EV will cost to own compared to an equivalent ICE. In all areas owning an EV is considerably less expensive than an ICE except for the USA in mid-term and low mileage cases, and in Korea for low mileage scenarios. 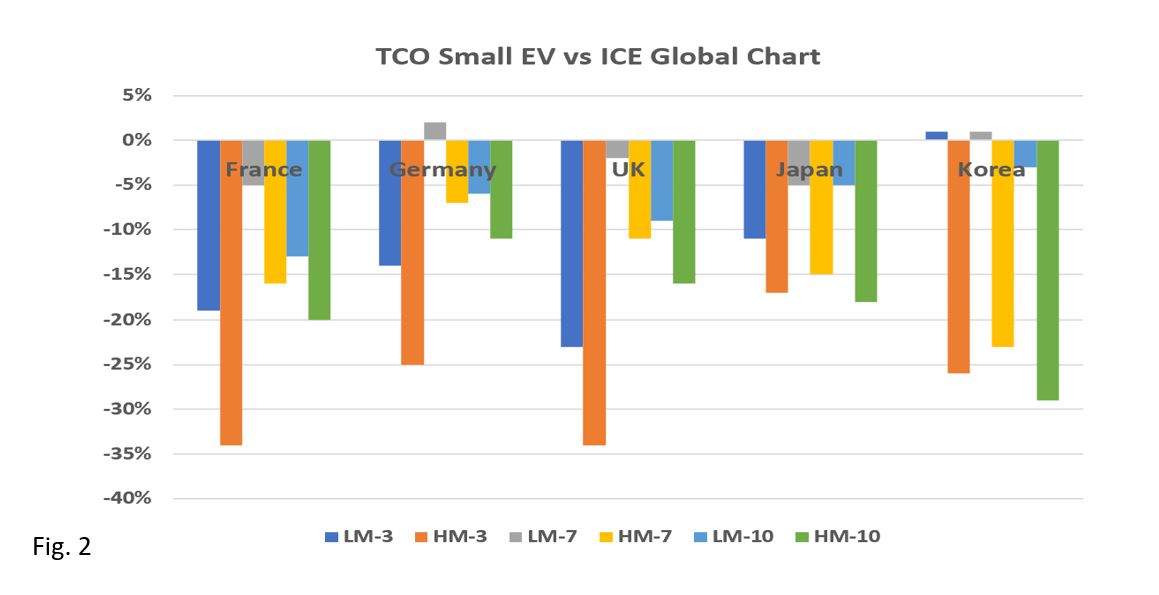 Figure 2 shows the percent differential a small EV will cost to own compared to an equivalent ICE in Europe and Asia. In nearly all areas owning an EV is considerably less expensive than an ICE.

Figure 3 shows the percent differential a luxury EV will cost to own compared to an equivalent ICE in the USA and Europe. In all areas the EV has a preferred TCO over an ICE only in the short-term (3 years) of ownership. This is due to the high loss in residual value of the ICE in the initial time of ownership.

Pre-conceived notions of insufficient electric vehicle range and lack of public charging stations are still certain barriers to the rapid uptake of EVs but it is clear that for most potential buyers throughout the world the economics of ownership favours that of EVs over ICE vehicles.

The electric vehicle (EV) market is growing at a healthy rate, driven by the need to reduce the global warming influences contributed by internal combustion engines (ICE). EV batteries have high nickel content. The Nickel Institute commissioned Avicenne Energy to conduct a multi-country study to understand the factors that influence the EV market.

Avicenne looked at the total cost of owning an electric vehicle in Europe to understand whether there is a financial motivation to owning an EV in Europe.

The total cost of ownership (TCO) varies dramatically across the globe and can vary significantly between countries within any given region.

For this European study, Germany, France, and the UK were investigated since they are the three largest European markets.

The cars chosen for this report represent three classes, small, mid-size, and luxury and in each class the vehicles were chosen to represent (as much as possible) common domestic offerings with equivalent options. Tesla S, chosen in the luxury category is the only non-domestic model.

The total financial cost of owning an EV in Europe could be a compelling advantage to the consumer for most vehicle models, particularly in small and mid-size vehicles.

Individual EU countries have significant differences with respect to, subsidies, taxes, and incentives when purchasing an EV which can make a major difference, representing up to 20% of the purchase price in some cases.

Small and medium sized electric vehicles have a clear advantage over ICE vehicles due to their subsidies and residual value but also due to the high cost of petroleum and diesel. Petroleum costs in the European countries investigated are 1.5 to 2.8 times more expensive than in the USA.

Contrary to smaller vehicles, luxury vehicles can have an extreme gap in the purchase price, (Tesla S, 81,990 Euro vs. BMW 5 series, 47,700 Euro). This price difference offsets the high cost of petroleum and for high mileage drivers, the TCO for EVs can be higher than for ICEs. In addition, the high cost of electricity in Europe increases the cost of EVs with large batteries. The cost of electricity in the EU countries investigated is 1.4 to 3.3 times more expensive than in the USA.

Germany having the highest electricity costs and the lowest petroleum prices, tilts the EV TCO closer to an ICE than in other countries, but there is still an advantage for most EV models.

In general, the electricity from public chargers is twice the cost of home charging and consequently full public charging will be kept to a minimum.